The green vehicle routing problem (GVRP) is a relatively new topic, which aims to minimize greenhouse gasses (GHG) emissions produced by a fleet of vehicles. Both internal combustion vehicles (ICV) and alternative fuel vehicles (AFV) are considered, dividing GVRP into two separate subclasses: ICV-based GVRP and AFV-based GVRP. In the ICV-based subclass, the environmental aspect comes from the objective function which aims to minimize GHG emissions or fuel usage of ICVs. On the other hand, the environmental aspect of AFV-based GVRP is implicit and comes from using AFVs in transport. Since GVRP is NP-hard, finding the exact solution in a reasonable amount of time is often impossible for larger instances, which is why metaheuristic approaches are predominantly used. The purpose of this study is to detect gaps in the literature and present suggestions for future research in the field. For that purpose, we review recent papers in which GVRP was tackled by some metaheuristic methods and describe algorithm specifics, VRP attributes, and objectives used in them.

This work is licensed under a Creative Commons Attribution-NonCommercial-NoDerivatives 4.0 International License. 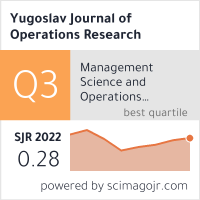